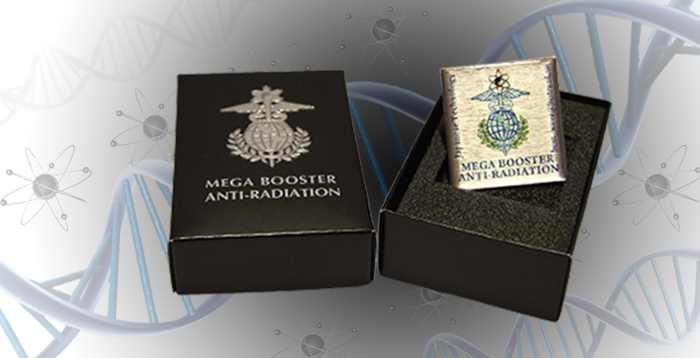 Mega Booster Anti-Radiation consists of metals and materials that are sophistically merged and structurally bonded at the molecular level.  The result is the production of healing energies that enhances the body’s biofield.

The Quantum frequency from the Mega Booster Anti-Radiation enchance the flow of positive healing energies and maintains the energy balance into the cellular core by keeping bad waves from reaching the DNA. It also restores weak energies in the body. By restoring the energy balance it helps to maintain the health and well being of the client. It is especially helpful for people who have a sensitivity towards electromagnetic fields.

The energy emitted from the Mega Booster Anti-Radiation works within the body and outwards. Outwardly the energies enhances the body’s own biofield. Inwards it works to facilitate cell healing and permeability which enhances the many physiological functions of the body’s cells.

The energy emitted from the Mega Booster Anti-Radiation i created from minerals that have been technically engineered to isolate certain sized particles that is targeted for their inherent resonance. After that the particles are recombined using ”Nano Fusion Technology” in certain ratios which are then bonded and fused together at the molecular level by the use of several high heat fusion methods.

The mineral combination and teqniques to achieve the fusion result in a catalytic conversion of energy, which in turn develops long lasting natural quality which possess the ability to be transformed to any liquid resulting in a renewal of the natural Nano-mulecular structure.

Positive charged ions has a tiring effect on humans and make us feel tired, depressed and easily irritable. They are generated from electromagnetic radiation, which in turn come from our everyday devices like televisions, hair dryers, computers, smartphones and even ordinary lights.

The renewed molecular structure resembles those you can find in natural spring water. Much like vegetables and fruits, the body steadily loses its Nano-molecular structure. The reason for this is that our cells ability to absorb liquid diminishes with age. However, the cells can rehydrated at the molecular level to provide liquid full of energy using the Mega Booster Anti-Radiation. Mega Booster Anti-Radiation are non-electrical, non-magnetic and thankfully requires no maintenance after the activation since they by then are inert and are not radioactive.

Several studies to illustrate how the Mega Booster Anti-Radiation affects the blood cells have been conducted. A blood sample was taken both before and after the usage of the Mega Booster Anti-radion from a random client and as illustrated in the picture below, the blood cells are in a rouleux formation, in other words clumped together. This formation diminish the possible amount of oxygen that can be transported. As a direct result of this reduced amount of oxygen you’ll among else feel fatigue, short of breath and tiredness. 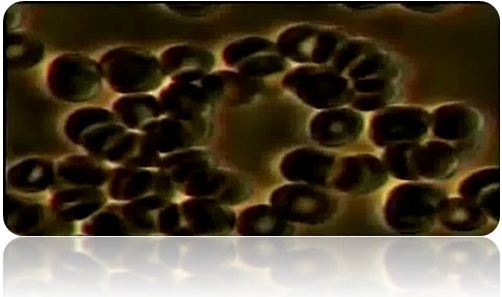 Two weeks after the initial blood sample a second one was taken to see the difference. The most notable change is that the blood cells are not as clustered as in the first blood sample. Becuase of this the blood cells can move more freely and absorb a much larger dose of oxygen and energy. 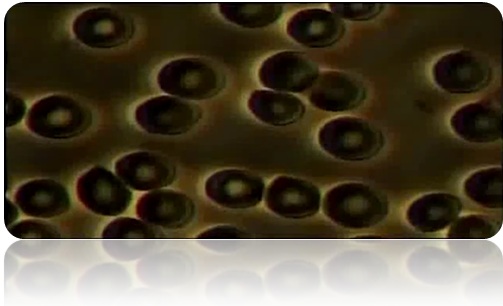 Another sample of blood was taken from a client that suffered from constant headache and serious fatigue. As you can see in the picture below the red blood cells are clotted in a roleaux formation have been inflicted with damage from bad positive loaded free radicals. The result is bad decreased oxygen supply to the cells and bad circulation. This also leads to a decrease in the red cells waste removal capabilities. A second blood sample was taken two weeks later, the standard amount of time between blood samples to notice differences. Now you can clearly see that the red blood cells are no longer as clotted as it was in the original blood sample. In other words a significant progress has been accomplished.

After four weeks had passed since the initial sample, the final blood sample was taken. When you compare the first and last blood samples an obvious and significant difference. The red blood cells are moving way more freely and the roleux can barely be observed. Since the major decrease of bad positive loaded free radicals the condition of the blood cells look much better. From a conversation with the client we could conclude that her energy levels and ability to focus has elevated. The frequency of her headaches had thankfully also been reduced and the intensity of the headaches occuring had decreased.

One of the more significant concerns rising from the development in the genetic field of the modern science is that new organisms is synthetically developed while our knowledge of the function of the biological system on the molecular level is limited. Conducting syntethic alterations to the complex natural system based on organizational patterns that we do not yet have a complete and working understanding of can be compared to let the development of important computer software  being done by hobby technicians who lacks the basic understanding of computer programming.

However, there is growing evidence of the influence of gene expression and function emanating from an even deeper level of bio-physical existence than the molecular level. This is the quantum levels of life. The role of such influences pave the way for new possibilities of a more comprehensive understanding of organism management at the fundamental level of biological structures. This level is even less understood than the aspects of gene control by the biological community. This level is important because until its accomodated and recognized its not very likely that the long term consequenses of introducing random introducing extraneous molecular sequences into the organisms using genetic engineering can be adequately predicted. However few people are aware of this today. In the future, quantum bio-effects are likely to operate in channels that are yet to be fully conceived by most genetic engineers. The primary focus remains to be at the molecular level of biological functioning, and communication with the community of physics continues to be very limitated. This are only appears on a few biotechnologists radars. Many other fields than the field of genetics need to be comprehended at the quantum scale. A number of important biological processes taking place in are driven and controlled by events driven by electronic degrees of freedom and because of this require a description from the world of quantum physics.

In enzymatically catalyzed and cellular biochemical reactions for example, bond breaking and formation events are intimately tied to changes of the electronics degrees of freedom. Another field of importance is the key events in photosynthesis in plants and ”energy metabolism in eukaryotes” also require a quantum mechanical description, all the way from absorption of light through photons by the photosynthetic apparatus, to the electron transfer processes sustaining the electrochemical membrane potential. Because of the great importance of sensing light to both animals (for vision) and plants (for regulating vital functions), the action between biological photoreceptors and light is highly spread in nature and requires quantum mechanical description. A good example of this is the protein called rhopsodin, which play a key role in vision and can be found in the retina of the human eye. As in all academic fields, Quantum biotics has many branches and paths. In this presentation text we can only bring forward a few of them, specifically those we think are interesting and comparatively easy to understand.
Self-Assembly, or Self-Organization which it is also called, can be defined as a spontaneous organization of individual components in a ordered structure. Self-Organizational dynamics is active in a number of the ”Quantum-Bio-Physics” structural changes acting without any interference of external agents. Quantum biophysics offers the possibility to demonstrate a viable strategy of interpretation of Self-organization in ”nano-biology”, taking the synchronic effect of parallel processing between ”local and no-local” co-evolutional information energy exchanges among DNA, RNA and Protein under consideration. By neutralizing the bad positive loaded free radicals the oxidation is slowed which allows the cell to produce molecules with a higher amount of energy.

The right hand picture visualize the difference between a molecule that is affected by bad positive loaded free radicals and one that is unaffected. The protein synthesis is a highly sophisticated and energy-consuming process, and becuase functional mutation of cell proteins is highly dangerous the risk of ”mis-folding” needs to be taken care of immediately. Metabolic diseases must be avoided in all living cells. Cofactors named ”Chaperons” usually assist the correct self-folding process. The Chaperons works as complemet structures of the ”Ribsome” to regulate the process performance of proteins folding trough ”Endoplasmatic Membrane”, in order to fold the polypeptide chains of amino-acids and then assemble the correctly functional groups of proteins to be able to yield active and mature proteins structures. Regarding ”mis-folding” enzymes called ”chaperonins complexes” assist in immediately destroying the mutant-proteins to fend off serious diseases. The remaining problem to grasp is the organization of signal communication in a way that ”Ribsome/ER/Chaperons” can work in a field och synchronic signal information, and in result creating a highly organized pathway of bio-transformation.

We can certainly observe that energy of such co-organization, for getting a correct vivo-folding of the proteins, doesnt work as statistical search of confirmations. The reason for this is that it would require an enormous amount of time and with it large huge amounts of energy will dissapate during the process of trial and error method of finding confirmation, while vivo the proteins folding works rapidly, sometimes even on the nanosecond scale. Topical studies of interactions between ribsomal and Endoplasmic Reticulum ”ER”, visualize the importance of nano-organizational of ER as a ”super lattice network” of the adjacent nano-tubules, cavities, sacs and vesicles contained within the inner membranes with granular lengths of nanoscale dimensions. In todays Post Genomic Era the understanding of the ”Ribosome/ER/Chaperins” self assisted assembly can be observed in Quantum Bio-Physics as a simultaneity of communication in an information in Energy field, active in the nanoscale space-time region.

To support the process of cells communication the Mega Booster Anti-Radiation provides quantum bio-feedback frequencies that enhance this. In addition to enhancing the communication between individual cells it signals are present during the transcription and replication of DNA.

To sum up, everything is based on frequencies. Life itself is frequencies, you and I are made from frequencis. The Mega Booster Anti-Radiation take advantage of the frequencies and heal the body through quantum bio-feedback frequencies and at the same time neutralizes bad ones, resulting in a stronger protecting aura and a more balanced chakra.